Bred By The Pack

Yay, I was able to get the first book in the Taken By Werewolves series done sooner than I planned. Available on Smashwords because of obvious content Amazon would throw a hissy over (aka bestiality.) 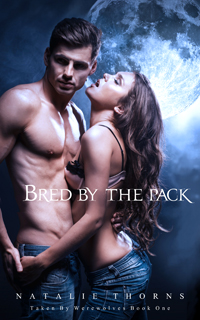 Bred By The Pack: Taken By Werewolves Book One

Laci slowed her angry walk, letting the flashlight skim the path ahead of her. The moon was full and just cresting over the trees, illuminating the night in a glow of silver. She was just going to have to start doing stuff on her own. Fun stuff—Stuff she actually wanted to do. The next time she heard about a camping trip, she’d just have to try going alone and see if it would be more fun. Sure, it would be nice to share the experience with someone, but for the entire day she hadn’t even been doing that. She’d been trying to avoid having to talk to the other girls instead.

Stopping short, Laci looked up as a strange, haunting note rose up in the distance. It sounded like a wolf’s howl. Not some idiot guys pretending to be howling. No, a real wolf howl. Shivering, she took in her surroundings as she was abruptly reminded she was traipsing in a forest where wild animals lived and hunted. The absolute brightness of the full moon cast impenetrable shadows around her and she could hear the lake on the other side of the wall of trees lapping at the shore. As she silently marveled at the way the mist seemed to glow with a soft blue tinge, another wolf answered the first, this one so close that Laci gasped and whirled.

She peered into the absolute darkness of a clump of brush surrounded by silvery light. The flashlight she had been clutching in her hand when she had stomped off she now waved, catching and stopping on something that glittered in the shadows. She could just make out the shape of something furry and tail shaped, and with wide eyes, Laci took a step back. “Holy fuck,” she whispered when the creature moved and took a silent step forward to reveal itself.

It was the wolf—Possibly the same one from before because it had burning amber eyes. It looked even larger in the dark, the moonlight absorbed into its black, charcoal coat until it looked more a spirit than a beast. Laci took another step back, flinching when a twig snapped beneath her sandal. Her entire body was tense with fear, the muscles of her ass and core clenching in a way she couldn’t help but notice even as she struggled to think.

What the fuck did you do against wolves? She had a fucking list of do’s and don’ts when it came to bears, and an even shorter but effective list for mountain lions. What the fuck did you do when it came to wolves? The creatures had enough stamina to run down a deer, exhausting their prey until it finally collapsed and the wolves feasted… Climb? Should she climb a fucking tree?

It was beautiful, possibly the most beautiful animal she had ever seen. Standing tall, it nearly came up to her breast, its fur sleek and glowing blue when it stepped in the moonlight. It hadn’t growled or done much of anything besides stare at her. Still, Laci couldn’t trust it. There was a wildness to it. An intelligent, primal glint to its eyes that warned her to run, and hide, and never let its huge fangs near her bare legs and arms.

Glancing over her shoulder, she tried to discern the path to the lake by moonlight alone. There was another howl in the distance and the wolf behind her suddenly joined in, Laci jumping and stumbling back from the sound.

Oh god, it was calling its friends. The fucking thing was calling its pack to come see the stupid chick that had thought to take a walk in the dark in the middle of the damn forest.

Her heart slamming in her chest, Laci turned her body sideways, trying to make herself into as small a target as possible. It still made her feel exposed and vulnerable, knowing her speed was reduced and reflexes slowed by the angle. She’d swim. She’d swim to the pier in the middle of the lake and wait for morning and the guys and their boat. She took small, swift steps down to the sloping trail, her head swiveling from the path ahead to the wolf behind where her flashlight was still aimed. The creature followed her leisurely; like they were just on a walk to the lake and the damn thing wasn’t hunting her down.

Laci’s plan was stopped dead when she stumbled onto the brightly lit, moon soaked beach. Four mountain sized wolves were waiting for her, standing in a group. Before them was Laci’s metaphorical deer bleeding out on the muddy shore. Gasping for air, she froze and held herself completely still. Maybe they’d be too full to eat her too? Oh god, maybe by stepping into their dinner, she had just added herself to the fucking menu! Fuck. Fuck, how the hell had this happened? What was a fucking pack of wolves doing less than a mile from her campsite?

Staring with growing terror at the pack of huge monster sized wolves, Laci abruptly realized she had forgotten about the wolf in the woods that had herded her there. She spun around, her flashlight shaking in her hands as she pointed it in the last direction she had seen the creature. Only to gasp, her heart lodging somewhere in her throat as she dropped the instrument and it clattered to the ground, the light sputtering out.

It wasn’t. It really fucking wasn’t.

“We’re not going to hurt you.”

Read the rest here on Smashwords!

This entry was posted in New Releases. Bookmark the permalink.