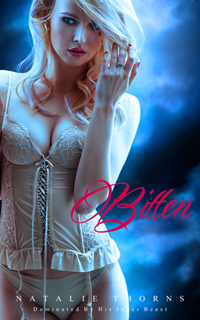 dominated by his inner beast

To get over his latest breakup, Seth Stevens takes his best friend Alexa on the weekend trip meant for his ex-girlfriend. He’s hoping to erase the heartache with the kind of pranks and fun only Alexa can provide. But fun turns deadly when Seth is bitten out in the woods by a magical creature. In minutes he’s feverish, confused, and showing signs of being taken over by his baser instincts.

Alexa Brooks, amateur sorceress and all around defensive in love beauty, has been fighting a poorly timed crush on her best friend. After Seth gets bitten, things turn wild when he ties her up in the middle of the night. Alexa might have enough power to escape her brutish friend, she’s just not sure if she wants to once he gets his hands on her.

This story contains graphic language, sexually explicit content, mild bondage, and a touch of magic. 18 + only